The longest river within today's European Union – and second-longest on the continent – the Danube River originates in Germany’s Black Forest, and flows in a southeasterly direction through central and eastern Europe to the Black Sea. Strategically important as a means of transport and trade since the dawn of history, the river served for centuries as the northern frontier for much of the Roman Empire. A preferred route of travel by rulers since ancient times, the Danube has long been called “the river of kings.” 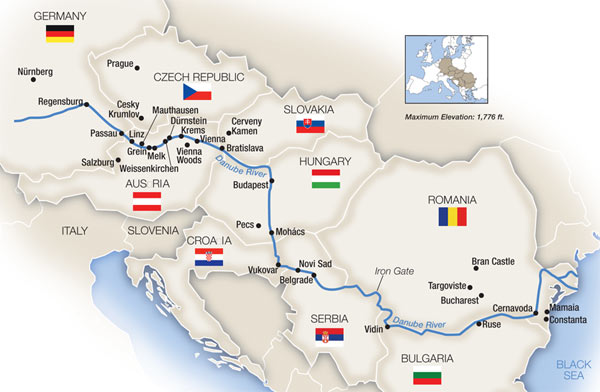 Medieval Period: After the fall of the Roman Empire, castles and fortresses were built along the Danube by Charlemagne (Werfenstein, 9th century) and other rulers throughout the Middle Ages, as various kingdoms merged into Austria’s Habsburg Empire by the 14th century.

Imperial Period: Between the 14th and 19th centuries, the Ottoman Turks struggled with the Hungarian and later Austrian (Habsburg) Empires for control of the Danube; the river formed the Ottoman Empire's northern border for centuries.

There are no less than five cities along the Danube where many of the world’s greatest composers of the last three centuries lived and worked at some point in their lives. A Mozart fan could trace his life and career from his birthplace in Salzburg, to one of several Vienna apartments he lived in (and his grave in St. Mark’s Cemetery), to the Estates Theatre in Prague, where Don Giovannipremiered, to Bratislava, where he performed as a child, and to Budapest, where his musical stamp is everywhere. The river itself has directly inspired works like “Waltz King” Johann Strauss II’s On the Beautiful Blue Danube and The Waves of the Danube by Romanian composer Ion Ivanovici.

Mouth: In the Danube Delta of Romania, at the Black Sea