Topics: Sandomierz Royal Castle and castles on the river Vistula - Presentation and Relations with the History of the Visegrad countries Good practice exchange; AR/VR and other visualization and update IT, IoT facilities – opportunities in Polish museums; Museum-management; Crowns by Rivers as a brand of the region, or preparation for joint actions in the Far Eastern, Overseas, Western Markets 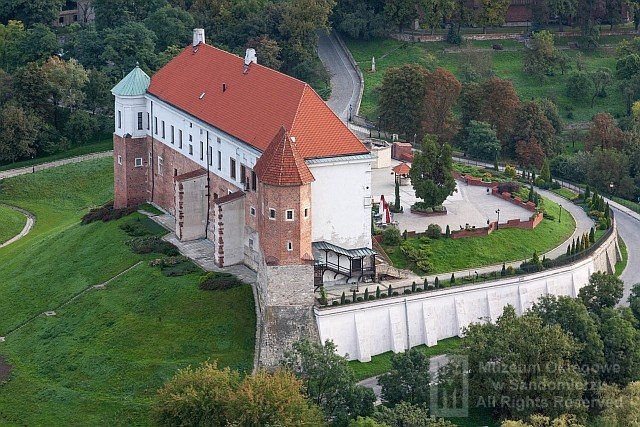 Agenda of the Workshop

- Open speech by a representative of gov. Poland/Region

- Presentations by representative of partners and a lecture on topic 1.

Topic 2a – Presentation and Q/A of the Argumented Reality (AR)

What was the purpose of this output?

The last meeting of JWG and conference connected with workshop.

During the conference we had chance for learn from each other. From partners presentation we could receive knowledge about the project Crowns of Rivers, and countries, castles and cities from where they arrived. With Polish quests of the conference were chance for discussion during round table about Rivers, fortresses, castles and use in that places VR and AR technologies. During JWG dinners on 21 and 22 of NOV there were discussion about the project, reports and future cooperation.

The event were promoted by web page of District Museum in Sandomierz:

Meeting started with on 21 Nov. with JWG dinner where was discussed the projects, outputs, and we had some talks about preparation of the final report.

(Weak point was absent of Slovakia Partner but strong was well prepared presentation and film which was presented.)

Strong point was active participation in round table meeting and was chance for partners for discussion with local and regional members of governments and representatives of touristic institution and museums during conference lunch.

What did you achieve with this event/product? How did it contribute to the fulfillment of the project objective set in the application?

The museum directors and partners in the round-table jointly reviewed the potential of existing new artificial intelligence tools (especially AR and VR technologies) and concluded that there was a more complex need for castle museums.

In the future, castles will be mainly centres of education, traditional consumption and experience, not just a treasure trove of cultural heritage.

One is to invest in castle museums to be able to convey real history instead of fictional, fantasy history, which dominates the media, IT presentations, mobile phone applications today.

The other is: It must be possible for the public to expand its services. (not same but functionally like it was happened in the consumption commerce appeared shopping centres)

This requires adjustment of human resources capacities and operations.

Event: How was the event promoted?

Product: By what means did you promote and disseminate the product?

The event were promoted by web page of District Museum in Sandomierz and by digital invitation send by newsletter of the Museum.

We also spoke about that with journalist of Local Media and .

1.) 20 copies of the seven-language booklet on Partner Castles from the Lead Partner to negotiate with inbound tourism businesses

2.) some flyers about the castle in seven languages for visitors, sent by post from the Lead Partner and to replicate as needed

Additional information are continually being put on the project website, which can be disseminated locally by the partners through their own communication system.

Which target groups were involved in this output and in what way? What was the number of people within each group? What was the balance in respect to V4 countries?

Attach attendance list/s or other proof/s of involvement/ participation to the Final Report, when possible.We involved state, regional and local government and politicians – 5,

We involved directors and employ from local, regional and state Museums – 10,

People from local, regional and state tourists agencies and offices, 10

Employ from District Museum in Sandomierz – 10

Local quests - Inhabitants from Sandomierz, some of Sandomierz Museum employ and politicians did not sign the list.

Two lecturers and one video represented partners of the project.

Describe each partner’s involvement in realizing this output.

Summarize the strong points and weak points of your partners´ involvement within this output.

Partner from Hungary and Belgrade took part in Sandomierz Meeting. From Slovakia could not come due to lots of official duties, but the video-film was sent and showed of Bratislava Castle and the Slovakian partner.